Purdy made Campbell look like a genius, closing the door on Kansas with a fourth-down touchdown pass with 1:09 left.

Purdy threw for 372 yards and four TDs — including the game-clinching one on fourth-and-goal from the 4 — and Iowa State rallied to beat Kansas 41-31 on Saturday and clinch its third straight winning season.

“Like I told our seniors, it was fitting that guts, toughness (and) heart was the way we were able to win,” Campbell said. “We didn't play great. I'm not going to sugarcoat that in any way, shape or form.”

But the Cyclones nearly blew it against the league’s last-place team.

Kansas (3-8, 1-7) scored two touchdowns in just 77 seconds late in the third quarter, the second coming after Purdy threw an interception, to jump ahead 24-21.

Purdy responded with a 24-yard TD pass to Breece Hall, and he ran for a five-yard touchdown with 5:10 left to put Iowa State back on top 34-31.

After stopping Kansas on fourth down at the Iowa State 37, the Cyclones could have either kicked the chip-shot field goal and made it a six-point game — with Kansas out of timeouts — or go for it all.

Campbell went for the kill, and Purdy scrambled away from danger until Shaw could get open for the score that sealed Iowa State’s fifth straight win over Kansas, a 24-point underdog entering play.

“They made one more play than we did, certainly at the end,” Kansas coach Les Miles said.

Carter Stanley threw for 328 yards and three TDs for Kansas, and Pooka Williams ran for 154 yards.

“Sick, frustrated,” Williams said of the vibe in the KU locker room. “But I feel like we have a chance...against every team we play.” 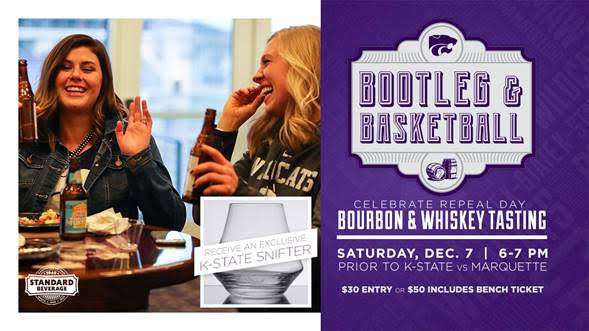 Bootleg and Basketball event is set for the K-State - Marquette basketball game Dec. 7

There will be a Hoops & Hops event as the Kansas State men's basketball team hosts Marquette on Saturday, Dec. 7th. There will be a Bootleg & Basketball ticket package that includes access to a pre-game bourbon and whiskey tasting event.

The event will have a throwback theme as K-State celebrates Repeal Day with tastings and cocktails in a secret location that will be revealed to ticket purchasers via text message the day of the event. This is being presented in partnership with Standard Beverage and will feature tastings and cocktails from Bulleit Frontier Whiskey, Jim Beam's small batch bourbons like Knob Creek and local Kansas distillery Boot Hill out of Dodge City.

Packages for the event include a special K-State branded snifter glass as well as food, spirit tastings and cocktails. Bootleg & Basketball tickets for those who already have game tickets are just $30. Event tickets that also include a bench ticket to the game are only $50. A limited number of both ticket options are available.

The deadline for fans to purchase tickets to Bootleg & Basketball is Wednesday, Dec. 4. Tickets can be purchased by visiting k-statesports.com, calling 1-800-221-CATS, or by visiting the Bramlage Coliseum ticket office in person from 8:30 a.m. to 5 p.m. Monday through Friday.