K-State (5-2) will wear the uniforms in Saturday’s “White Out” game against Marquette (5-2) in the inaugural Big 12/Big East Battle at 8 p.m., CT at Bramlage Coliseum.

The replica uniforms and a full Nike product line featuring the “Wildcats” script are now available at K-State Athletics’ official online store, shop.kstatesports.com, and the K-State Super Store located on McCall Road in Manhattan. The line is also available at the K-State Campus Store in the student union and Rally House and Dick’s Sporting Goods locations.

Fans are encouraged to wear white in the nationally televised contest against the nationally ranked Golden Eagles with tickets available for less than $20 with a Wildcat 4 Pack. A limited number of Bootleg & Basketball ticket packages still remain, which include the pre-game bourbon and whiskey tasting event in a secret location that will be revealed to ticket purchasers via text message the day of the event. ­

Packages for the event include a special K-State branded snifter glass as well as food, spirit tastings and cocktails. Bootleg & Basketball tickets for those who already have game tickets are just $30. Event tickets that also include a bench ticket to the game are only $50. A limited number of both ticket options are available.

A variety of ticket options are available by visiting k-statesports.com, calling (800) 221.CATS, or by visiting the Bramlage Coliseum ticket office in person from 8:30 a.m. to 5 p.m. Monday through Friday. 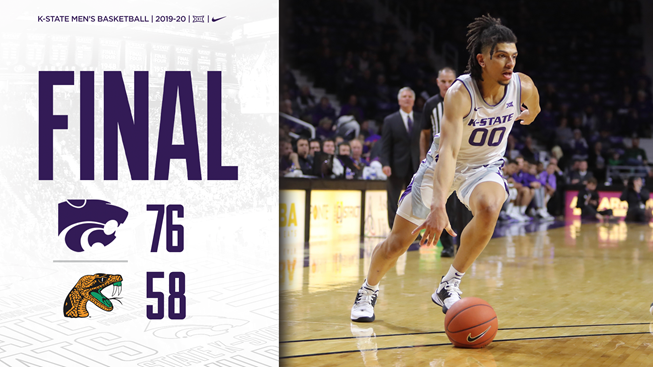 The Wildcats (5-2) forced 17 turnovers and scored 18 fast break points off those mistakes as Kansas State had 20 turnovers, tied for their most this season.

The Rattlers (0-6) couldn’t get the outside shot to fall going 1-of-11, while the Wildcats hit nine 3s. McGuirl and Sneed combined for had six 3-pointers.