Topeka High jumped out to a 29-3 first quarter lead and rolled to a 79-23 victory over the Junction City Lady Jays at the Shenk Gym on Friday night.

Junction City struggled to move the ball on offense and did not score a field goal until about 6:30 remained in the third quarter.  Lucy Rivera led Junction City with six point, while Kiki Smith topped Topeka High with 24. 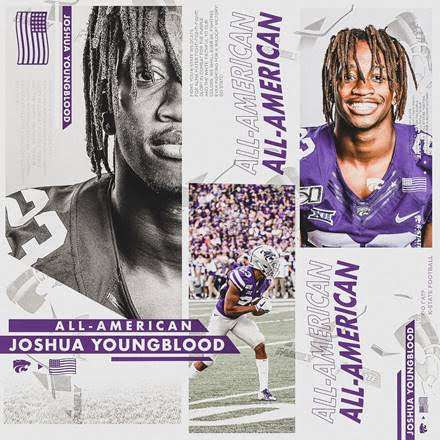 MANHATTAN, Kan. – Kansas State freshman Joshua Youngblood was rewarded on a national scale for his performance in 2019 as the Tampa, Florida, product was named to a pair of All-America teams this week.

The 2019 Big 12 Special Teams Player of the Year and First Team All-Big 12 kick returner, Youngblood ranks first in the nation with three kickoff return touchdowns, going 98 yards for a score at Texas, 100 yards at Texas Tech and 93 yards on the opening kickoff against Iowa State. His three kickoff-return touchdowns rank third in school history for a season – and are tops among freshmen – while he ranks fourth in K-State history for a career. Youngblood also ranks third in Big 12 history and tops among freshmen for single-season kickoff-return touchdowns, while he is tied for seventh in league history for a career.

Youngblood holds a Big 12-leading 38.1-yard kickoff-return average, which would rank first in the nation if he had two more attempts to meet the NCAA required minimum.

Kansas State takes part in the 61st Annual AutoZone Liberty Bowl on Tuesday, December 31, when the Wildcats face Navy inside Liberty Bowl Memorial Stadium in Memphis, Tennessee. The game is slated for a 2:45 p.m. (CT) kick and will be shown nationally on ESPN.

Join the Wildcats in Memphis by purchasing seats in K-State’s sections, parking and pre-game party tickets by visiting www.kstatesports.com/bowlgame or calling 1-800-221-CATS. Sideline bench seating is available for just $85 per ticket, and a limited number are still available at midfield. Parking passes are available for just $20 each. Fans are also invited to purchase tickets to the bowl’s pre-game party, which includes an all you can eat buffet, next to the stadium for just $40.