No. 21 Navy will try to cap its extraordinary turnaround when it plays in the Liberty Bowl against a Kansas State team that also has made major strides this year.

Navy is 10-2 and attempting to match a program record for single-season victories a year after just three wins. Kansas State has bounced back from a 5-7 season to go 8-4 in its first year under coach Chris Klieman. Navy has the nation's top-ranked rushing attack with an offense featuring quarterback Malcolm Perry. 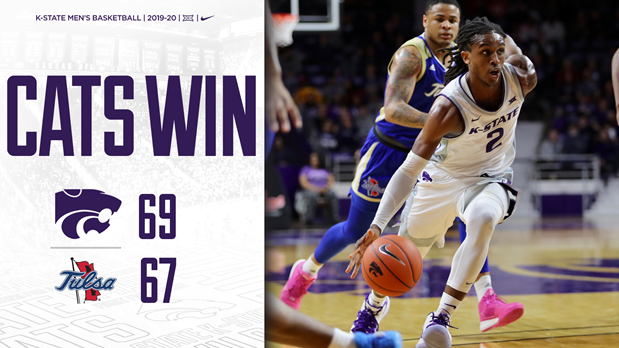 K-State hangs on to defeat Tulsa

K-State (7-5), which had lost 4 of 5 games this season by single digits, including consecutive setbacks to Mississippi State and Saint Louis, was able to finally close out a tight contest behind the efforts of junior Cartier Diarra (25) and senior Xavier Sneed (18), who combined for 43 points, and, in the process, end a 2-game skid to Tulsa (8-5).

The game mirrored the last matchup between the schools, in which, the Wildcats missed consecutive shots in the paint in the waning seconds as the Golden Hurricane held on for a 47-46 win at home on Dec. 8, 2018.

Trailing 66-64 with 2:14 remaining, Sneed ignited the comeback with a steal of Tulsa’s Martins Igbanu and tied the game on a jumper from the free throw line with 1:24 to play. After a miss by senior Lawton Korita, who led the Golden Hurricane with 12 points in the second half, on the next possession, freshman DaJuan Gordon grabbed the defensive rebound and head coach Bruce Weber called a timeout with 27 seconds to go.

With the shot clock set to expire, Diarra uncorked his sixth 3-pointer -- a step back triple -- with 22.4 seconds to give the Wildcats a 69-66 lead. Tulsa junior Darien Jackson was fouled and injured on a collision in the paint with 13 seconds but was unable to attempt the 1-and-1, forcing senior Martins Igbanu to try the free throw. Igbanu made the first, but missed the second, as Sneed snagged the board and was fouled.

Sneed missed the first end of the 1-and-1 free throw with 9 seconds, giving the Golden Hurricane one last opportunity, but Mawien was able to block Joiner’s shot with 1 second.

Diarra led all scorers with a career-best 25 points on 8-of-16 field goals, including a career-high 6-of-11 shooting from 3-point range, to go with a game-high 7 assists and 5 rebounds in 33 minutes. It marked his third career 20-point game, including his second this season. Sneed added 18 points on 6-of-15 shooting to go with 6 rebounds, a game-high 4 steals and 2 assists in 34 minutes.

The contest ends an eventful 3-game series between the two schools that were all decided by single digits, including wins by Tulsa in Wichita in 2017 and last season in Tulsa.

K-State got off to a slow start, missing its first 7 field goals, as Tulsa took a 6-1 lead after a steal and dunk by junior Reggie Jones just after the first media timeout at the 15:42 mark.

The lead grew to 14-3 after 8 consecutive points, capped by a defensive goaltend on a layup by junior Darien Jackson, which forced head coach Bruce Weber to call his first timeout at the 12:28 mark.  The Wildcats were just 1-of-10 from the field, including 0-of-6 from 3-point range, to go with 4 turnovers in the first 7:32.

Down 16-3 after the Golden Hurricane extended their run to 10-0, the Wildcats got back into the contest with some sharp shooting beyond the arc. Sneed started off a run of 4 makes from 3-point range from 3 different Wildcats (Sneed, Cartier Diarra and Mike McGuirl) that cut the deficit to 24-19 with 7:13 before halftime.

After Tulsa answered with its first 3-pointer from the corner just out of the third media timeout, K-State responded with a 7-0 run, capped by a steal and dunk by Sneed, that closed the gap to 27-26 and forced head coach Frank Haith to call his first timeout at the 5:18 mark.

Two free throws and a 3-pointer from junior Brandon Rachal gave Tulsa the lead at 34-33, but back-to-back 3-pointers by Diarra and junior David Sloan and a free throw from Sneed gave K-State a 40-34 at halftime.

A Sneed jumper and a free throw by senior Makol Mawien gave the Wildcats a 43-34 lead just 65 seconds into the second half, but the Golden Hurricane scored 9 in a row to grab the lead at 46-45 on a 3-pointer by senior Lawson Korita at the 14:43 mark.

The two teams traded the lead 7 times over the next few minutes with neither leading by more than 2 points until a corner 3-pointer by McGuirl gave K-State a 58-55 lead with 7:19 to play. However, Korita answered for Tulsa from long range on the next possession to even the score at 58-all at the 6:05 mark.

A tip by freshman DaJuan Gordon on a Sneed miss gave the Wildcats a 64-61 lead with 3:44 to play, but a jumper by senior Martins Igbanu and 3 free throws by junior Jeriah Horne on a foul by junior Levi Stockard III gave the Golden Hurricane a 66-64 edge with 2:23 remaining.

After Sneed tied it at 66-all on a jumper in the lane, Diarra connected on his sixth 3-pointer of the game, including his first of the second half, with a step back triple with 22.4 seconds to play to give the Wildcats a 69-66 lead.

Jackson was fouled on a collision in the lane with 13 seconds remaining but was injured forcing Igbanu to head to the line for 1-and-1. He made the first one, but missed the second, with Sneed grabbing the defensive rebound and earning the foul. Sneed, who uncharacteristically struggled from the line (4-of-8), missed the first end of the 1-and-1 and Rachal grabbed the rebound, giving Joiner one last chance before the Mawien block.

PLAYER(S) OF THE GAME

STAT OF THE GAME

“I’m happy for the guys and proud of them, especially the older guys. We need them to be consistent, give us something. The win helps everyone else. It wasn’t a great start when you spot them a 13-point lead, but to our guys’ credit, they fought back into the game, took the lead, even stretched it out in the second half. We said they’re not going to quit and they didn’t. We had a couple bad possessions in that stretch in the second half, but kept making plays and finally, Cartier (Diarra) makes a big shot, Mak (Mawien) has a big block, Xavier (Sneed) a big rebound. It would’ve been nice to not make it even tougher, make those two free throws. I’m happy for them, happy for the guys. They were very quiet before, very quiet after shootaround, I was hoping that meant they were locked in, but obviously they weren’t very locked in to start the game. I just challenged them. You better compete. You’ve got to compete, you’ve got to play hard, you’ve got to defend. We made some strides after spotting them and found a way to win a game. Hopefully, that will help us take another step.”

K-State opens Big 12 play next weekend, as the Wildcats hit the road for Norman, Okla., to take on Oklahoma (8-3) on Saturday at noon at the Lloyd Noble Center. The game will air on Big 12 Now on ESPN+.