Manhattan advances to the Class 6A Boys State Basketball Tournament

The Manhattan Indians boys basketball team ( 15-7 ) will play Haysville-Campus ( 22-0 ) Thursday at 6:30 p.m. in the first round of the Class 6A State Basketball Tournament. The Indians are the eighth seed while Haysville-Campus is the number one seed in the tournament. 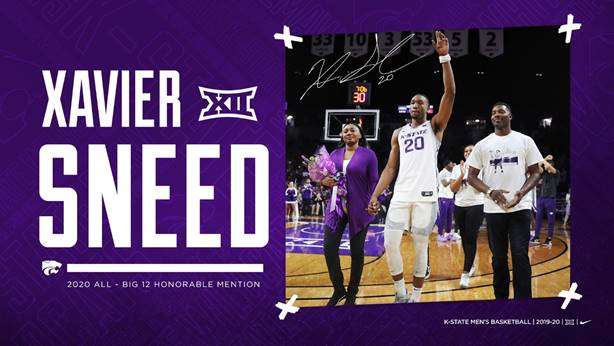 Sneed is the 14th Wildcat to earn multiple All-Big 12 honors in his career.

Big 12 champion Kansas earned a pair of individual awards, as senior center Udoka Azubuike was named the Player of the Year, while junior Marcus Garrett was selected as the Defensive Player of the Year. Second-place Baylor won four awards headlined by Coach of the Year Scott Drew to go with Newcomer of the Year Davion Mitchell, Most Improved Player Freddie Gillespie and Sixth Man Award winner Devonte Bandoo. Texas Tech’s Jahmi’us Ramsey was the Freshman of the Year.

The All-Big 12 awards are selected by league’s 10 head coaches, who are not allowed to vote for their own players.

Sneed ranks among the Big 12 leaders in several categories, including eighth in scoring, third in steals, ninth in 3-point field goals made and minutes, 11th in free throw percentage and 18th in rebounding.

Sneed enjoyed a special game in his appearance on Saturday at Bramlage Coliseum, as he scored a career-high 31 points to help the Wildcats defeat Iowa State. He scored 26 of his 31 points in dominant first half, as he was nearly perfect in helping the squad build its largest halftime lead (19 points) in Big 12 play, as he connected on 8-of-11 field goals, including 4-of-7 from 3-point range, and was a perfect 6-of-6 from the field. It was his first career 30-point game and the first by a Wildcat since Barry Brown, Jr., had 34 against Baylor on Jan. 22, 2018.

“I’m happy it was special,” remarked head coach Bruce Weber after the game. “He was able to rise up. They all were able to rise up and play at a special level. You couldn’t be happier for him. He’s a good young man. He wants to do well, maybe sometimes too much, but he cares. His numbers are staggering. Before the game, top 10 scoring, rebounding, steals, three-points made, starts then you add a Big 12 championship that you were a part of.  There’s not many banners and you’re part of that, so hopefully they’ll be appreciated.”