Season ticket priority deadline for football is extended to May 1

MANHATTAN, Kan. – With recent events surrounding the COVID-19 pandemic, K-State Athletics announced today that the season ticket priority deadline for the 2020 football season, originally set for April 17, has been extended to May 1.“These are certainly unprecedented times that have impacted our entire country, and we want to do everything we can to be of assistance to our fans,” Athletics Director Gene Taylor said. “While we are firmly focused on the health and well-being of our country by maintaining flexibility and adaptability each and every day, we do look forward to returning to a degree of normalcy which includes an exciting 2020 football season.”Along with the deadline extension, a new three-month payment plan will be introduced. This payment plan will give fans the flexibility of being able to secure their seats but won’t require them to make a payment toward their balance until May 1.

Season ticket options start at less than $22 per game, a savings of more than 50-percent off the single-game price. All season ticket prices in Bill Snyder Family Stadium remain unchanged for 2020.In addition, those with a group, company, or event who want to celebrate at Bill Snyder Family Stadium for the 2020 football season, the Wabash Landing is a great option for groups ranging from 100-150 people. The Ahearn Fund is currently taking requests which will be extended through the new May 1 deadline, and interested parties can contact 1.888.232.9074 or email [email protected].Both the ticket office (1.800.221.CATS) and Ahearn Fund office (1.888.232.9074) have staff available to take calls 8:30 a.m. to 5 p.m. Monday through Friday. Fans can also log into their on-line account or purchase new tickets at kstatesports.com. 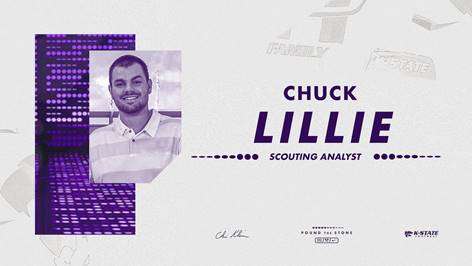 MANHATTAN, Kan. – Chuck Lillie, a bright young mind in the recruiting and scouting world, has been hired by Kansas State’s football program as a Scouting Analyst.

Lillie will spend his time evaluating film of prospects and assisting the football coaches in their recruiting efforts. He will also work with Director of Football Recruiting Taylor Braet and the recruiting staff in hosting prospects on campus.

“We are thrilled to have Chuck as a part of our program,” head coach Chris Klieman said. “We knew we wanted to expand our recruiting staff and provide more assistance for Taylor and Hank Jacobs, and to get someone like Chuck is phenomenal for our program. He not only comes from one of the top football programs in the country, he has tremendous organizational skills, brings a great deal of energy and is well-connected in the recruiting world. We are excited to have him on board.”

Lillie worked for five seasons at Clemson while obtaining his undergraduate degree, including three seasons in recruiting. He comes to Manhattan after serving in the 2019 pre-season as a Pro Scouting Intern with the New York Giants before returning to Clemson to serve as a Playoff Analyst for the Tigers’ 2019 campaign.

“I’m extremely excited to join Coach Klieman and the entire Kansas State football family,” Lillie said. “It’s an honor to be working for this staff, and I’m looking forward to helping bring championships to Kansas State.”

Lillie earned his start at Clemson as a recruiting assistant from 2015 to 2017 where he developed a very thorough understanding for the Tigers’ unique style of recruiting. He collaborated with coaches and colleagues to create strategies to generate interest in Clemson among all recruits. He also assisted in the hosting of prospects and families while on campus and in Football Operations complex.

After graduating from Clemson with a degree in Sports Communication in May 2017, Lillie was a Recruiting Operations Intern for one year before pursuing his master’s in Athletic Leadership and serving as a Defensive Graduate Student Intern for the Tigers during their undefeated National Championship run in 2018.

While working on the recruiting side, Lillie assisted coaches and the recruiting department in execution of both day-to-day and big-picture recruiting plans. He worked to identify any unknown prospects and passed those prospects along to coaches to be evaluated further. He also worked directly with the graphic design department to send out personalized graphics to recruits.

In his one year in East Rutherford, Lillie studied and evaluated NFL players and made cut-up tapes on players for the Giants’ Pro Personnel Department to evaluate. He also monitored the daily NFL waiver wire and managed free agent short lists across all positions. In addition, Lillie wrote advanced scouting reports on upcoming opponents, including team tendencies and personnel packages, and he assisted with all free agent workouts.

Lillie is a native of Baltimore, Maryland, and graduated from the Boys’ Latin School of Maryland in 2013.