Korn had spent the past five seasons with the Wildcats, the past four as an assistant coach. He helped the school make three NCAA Tournament appearances and win a share of the Big 12 regular-season two years ago. Korn takes over for Rick Ray. He was fired after going 51-104 over five seasons, including a 7-24 mark this past season. 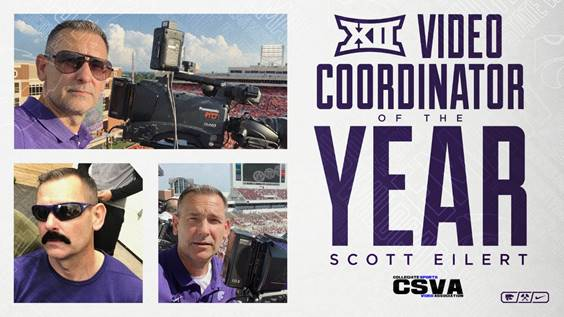 MANHATTAN, Kan. – In an announcement by the Collegiate Sports Video Association (CSVA), Kansas State Director of Video Services Scott Eilert has been named the 2019-20 Big 12 Conference Video Coordinator of the Year.

Eilert was selected by his peers in the Big 12 to receive the award, his sixth conference video coordinator of the year award. In 1998, he was selected as the Bob Matley National Video Coordinator of the Year. This year’s conference award makes him a finalist for the Bob Matey award, which is presented to the video coordinator who displays innovation, determination, perseverance, and technical skill as portrayed by the late Bob Matey, legendary Video Coordinator from Texas A&M.

Eilert is in his 29th season overseeing the football program’s state-of-the-art video editing system as Kansas State’s senior video coordinator. He is a founding member and former executive officer of CSVA and was inducted into the organization’s Sports Film and Video Hall of Fame in May of 2017. In 2001 and again in 2003, Eilert won SAVVY Awards for best motivational video, while his 2010 submission in the “highlight” category placed second.

Eilert has played a vital role in the success of the Wildcat football program. He coordinates and implements the use of video technology for practices and games, as well as managing statistical analysis tools for the coaching staff to use in game strategy preparation.

In addition to his work assisting the coaching staff and promoting the program, Eilert has also played a major role in the upgrades and improvement of facilities around Bill Snyder Family Stadium, providing audio/visual consultation for the West Stadium Center, while he was directly involved with audio/visual integration for the Vanier Family Football Complex featuring A/V technology supporting the needs of the football players and coaching staff, as well as Vanier Complex guests.

Having supported the Wildcats for 21 bowl games and two Big 12 Championships, other highlights of Eilert’s career include facilitating the video needs of the Wildcats during their 1992 regular season game in Tokyo, Japan. K-State spent a week in Japan as they prepared to play Nebraska in the Coca-Cola Classic. Eilert also spent a week at the National Training Center at Fort Irwin with Manhattan and Junction City dignitaries documenting how America’s fighting forces train for military action. Another great moment for Eilert is when he ran main camera and served as editor for the internet vignettes known as “The Recruit,” a creative collaboration with Emmy Award-winning actor Eric Stonestreet to celebrate head coach Bill Snyder and the start of the 2018 football season.

A 1991 K-State graduate, Eilert spent three years as K-State’s assistant video director while an undergraduate student. He also spent one year as a video assistant with the Kansas City Chiefs as well as a broadcast engineer for the Kansas City ABC affiliate, KMBC.

Outside of his busy professional life, Eilert takes great pride serving on the board of directors for Big Lakes Developmental Center, Inc. BLDC is a private, nonprofit-organization serving individuals with intellectual/developmental disabilities covering several counties in Kansas.

A native of Overland Park, Kansas, Eilert is married to the former Meggan Luke. The couple has two daughters, MaKenna and Hailey.